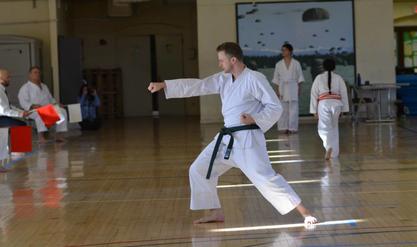 Kyu testing takes place once a semester (including the summer) at Yale. Dan testing happens in New York City with Takahashi Sensei twice a year.

There are regional tournaments twice a year and a couple of other less formal tournaments during the year. Tournaments are conducted by rank, so anyone who’s been training for at least a month can enter. Participation is optional, but in the past the Yale class has had a fairly good turnout.

If more than one person is testing for a particular kyu, then the kihon and kata are usually executed by two or three people at a time. Sparring is done by one pair of karateka at a time.

The requirements for each kyu test are listed on the following pages:

The grading fee for students testing for white belt is $20, for green belt is $25 and for brown belt is $30.